تخطي إلى المحتوى
capcom’s Monster Hunter series has mostly lived on intendo consoles for the past decade, so this was a pleasant urprise, probably spurred on by the success of the same company’s 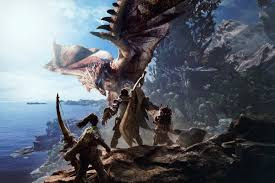 Dragon’s Dogma on PC. We do love to stab a big monster, it seems. This is traditionally a co-op series where players team up with three friends and go looking for big, bad beasties to kill. Monster Hunter World looks like it will be more of the same, but also features a grappling hook and destructible environments that you can pull
down onto creatures, both of which are new additions to the series. It looks spectacular – several grades above the ancient-looking versions served up on Nintendo consoles. It’s not hard to picture this phenomenon finding similar success on PC.