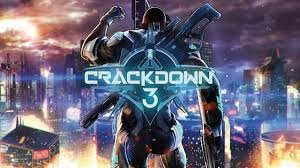 Crackdown was a superhero platformermeets- action game, where these agents would scour the city for criminals and root out evil gangs. It was unexpectedly terrific at the time on Xbox,
offering co-op fun as players climbed buildings, lobbed cars and blew stuff up together. This is its first venture onto PC, and the results are pretty impressive so far. I played a ten-minute demo
where I ran through a fraction of the game’s giant city, blowing stuff up with an array of sci-fi weaponry, including the brilliant black hole-generating singularity gun, which drags cars and enemies in before exploding them in every direction. As Agents of Mayhem struggles to capture our interest as a spiritual successor to Saints Row IV – especially with no co-op mode – this could fill the gap nicely.